The Central Bank of Liberia announces official start of the currency exchange exercise in the country today with the release of newly printed Fifty (50) and Twenty (20) dollars Liberian Banknotes via commercial banks, totaling about LRD 2 billion.

Central Bank of Liberia Executive Governor J. Aloysius Tarlue, says newly minted Five and Ten Liberian Dollar Coins will arrive in the country next week and put in circulation in November to ease the current change crisis in the market, as a result of the shortage of smaller denominations of banknotes.

The Central Bank is for the first time, introducing 1,000 Liberian banknote on the market as the highest denomination in the country.

“As of today, the Bank has received a total of L$1.9935 billion of the L$50 and L$20 denominations. This batch came between September 4 and September 19, 2022. The Bank has completed the quality control of these banknotes in line with CBL’s specifications. The coins are expected in the country before the end of October 2022.

We expect to receive a total of L$34,533,500,000.00, including the initial L$8,000,000,000.00 of the new banknotes that were brought in between November 2021 and February 2022 and a total of L$462,900,000.00 coins by the end of 2022. This will comprise all the existing denominations, including the L$1,000 denomination, which is being introduced for the first time. The remaining amount will be brought into the country in 2024. For purpose of clarity, no banknotes or coins will be brought into the country in 2023. However, the exchange exercise will continue with the banknotes and coins that will be in the country”, Governor Tarlue says.

He also notes that this process will take off thru the commercial banks, and there will no mapping up exercise by giving money to individuals or institutions other than commercial banks.

Reading a special statement to journalists in the Ball Room of the CBL in Monrovia on Wednesday, 5 October Governor Tarlue disclosed that the newly printed banknotes have been disbursed to commercial banks following a meeting yesterday.

He says the consignment of banknotes arrived in the country between September 4 -19, 2022 and was fully validated.

He calls on the public to proceed to various commercial banks to begin exchanging the old or mutilated banknotes currently in circulation with the new currency.

“Considering the challenges faced by the commercial banks and limited branch network across the country, the CBL is working on a strategy to decentralize the exchange exercise through its cash hub in Gbarnga, Bong County and other approved facilities under the direct control and supervision of the Bank, to ensure that all parts of the country are covered. In addition to ensuring the timely delivery of the new currency in the country, the CBL has also been working to put in place the necessary logistical and operational capacities, to ensure the smooth implementation of the exchange exercise.”

Governor Tarlue urges banks to open widows for those in the public with small volumes of money, but don’t have bank accounts. However, he encourages everyone to open accounts with commercial banks.

The ongoing currency exchange exercise is a three-year program initiated by the government to replace mutilated banknotes in circulation across the country.

The Executive Governor thanks international partners for working with the Bank to achieve the printing of new banknotes for the country.

“We are also grateful to our external partners, notably the International Monetary Fund (IMF), the United States Agency for International Development (USAID), and the US Embassy, for their financial, technical, and moral support in this process. We are particularly grateful to Kroll & Associates from the UK, who worked with the Bank throughout this process, providing technical assistance to the Bank, with funding from USAID.”

For counties where there are no commercial banks, Governor Tarlue says the CBL will collaborate with rural financial institutions to serve citizens there.

Meanwhile, the Governor clarifies recent report of a fire incident at the Central Bank, explaining that an air conditioner had electrical shock and there was smoke, which was wrongly presented as fire gutting the vaults at the Bank. “There is no fire gutted at the Central Bank”, he says. 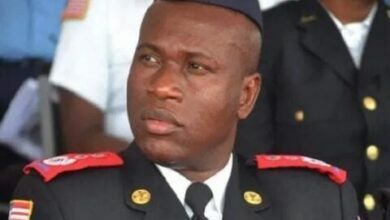