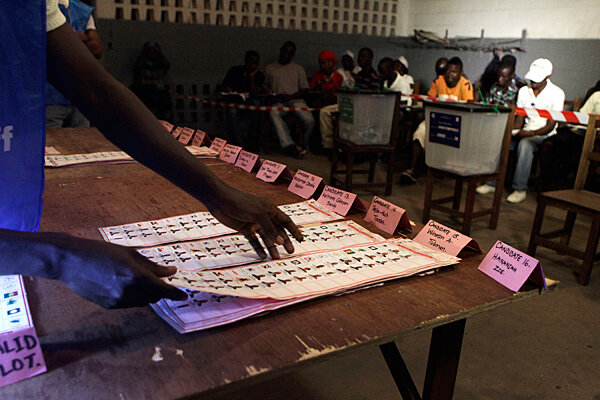 Chairman Oscar Bloh at a news conference on Thursday, October 12, in Monrovia explains that ECC observers observed inconsistence in how National Elections Commission staffs addressed the issue of voters’ names missing from the Final Registration Roll.

According to him, while voting process within the polling place generally ran smoothly, ECC observes that NEC staffs experienced challenges in managing queues and directing voters to the proper polling places.

“Particularity in areas with higher numbers of registered voters and in voting precincts located in facilities not adequate to accommodate these, this resulted in long waits and frustrations among voters and caused voting and counting to extend long past the official closing time.”

Meanwhile, the ECC is recommending to the National Elections Commission to urgently inform the public and political parties on the procedures for voters whose names are missing from the final registration roll in order to ratify any challenge.

“Polling staff should also receive timely, clear, and consistent instruction in these procedures. Update logistics plans to ensure a timely delivery of all elections materials. Ensure voters are informed about the runoff elections. Consider relocating congested polling precincts to other locations that will facilitate the free flow of voters,” Mr. Bloh stresses.

Cummings returns home after month-long tour in Europe and U.S.

Unity Party gears up for convention

Dillon: My target is to remove Weah

Weah: No room for non-performers

4 weeks ago
Back to top button
Close