NEW YORK, USA, 20 June 2022-/African Media Agency (AMA)/- Rose Mary Tiep, fled domestic abuse and the conflict in South Sudan five years ago. Today she is helping others through their trauma in an Ugandan refugee camp, as part of a UN-backed support programme.

Ms. Tiep lives and works in Omugo II, an extension of Rhino Camp Refugee Settlement, which is home to 43,000 refugees from South Sudan.

After receiving counselling from the Spotlight Initiative – a global initiative of the UN, supported by the European Union, which aims to eliminate all forms of violence against women and girls – she became a volunteer psychosocial support assistant with an NGO in Uganda, helping other women and children leave and recover from violent situations.

“Two things led me to flee South Sudan: the war and my abusive husband. I was living in Yei, South Sudan, working for an organization that handled cases of violence against women.

Life was fine, I had money and a place to stay. I was even able to buy a car from my earnings. However, I now know that even if you have resources, if you have stress in your mind, you can go mad.
My husband used to beat me. He was a soldier and would threaten to shoot me. Sometimes, I would sleep in the bush. He felt that the children favoured me, and he would get angry about that, but children know love and that’s why they favoured me. I decided to leave him.

I fled in August 2017 and arrived in Uganda four days later, after a painful journey with my five children. I was unable to carry food; because the children were so young, I had to carry them. We walked using side roads because driving on the main road would get us killed by the rebels. The rebels wanted to capture me as their wife as they knew I had money.

Once we reached the border, we were met by the UN who helped transfer us to the settlement

Adjusting to a new life and challenges

When I first arrived at Omugu II, I wanted to die. I was lonely, I would isolate myself and pity myself. In South Sudan, I was doing well.

As refugees, we experience discrimination. Sometimes, the host community will claim the land as theirs. [Within the settlement, every refugee household is allocated some land to plant food.] Even if they harass you, you’re not allowed to respond to them, or they react violently. The host community are resentful that we are using their land, but this is not their land, this is God’s land. The host community speaks Lugbara, so we cannot communicate.

Psychosocial counselling sessions [with TPO Uganda, an implementing partner of UN Women] helped me a lot. I can support my children now. Thanks to the psychosocial support I received, I was able to be a better mother.

Even when the counselling sessions ended, I mobilized groups of women and we would hold discussions. I transferred the knowledge I gained to the community – I continued the work that I left behind in South Sudan. I chose to enrol as a Volunteer Psychosocial Assistant (VPA) with TPO Uganda.

With the confidence I have gained, I now help families that experience violence and I make referrals to partners, police and to childcare, if the case requires it.

We give psychosocial support to children who have lost their parents and I learnt how to identify cases of gender-based violence. I usually pose questions to the women, using my own life experience as an example.

The volunteer training changed me, and I am now recognized in the community. I have changed the lives of community members who have experienced violence and I was enrolled as a women’s representative in the Omugo community. I feel confident and comfortable in my work.

I wish that my children could have grown up elsewhere, and not in a settlement. I want to make sure they learn, go to school and get jobs. One day I will be old, I want to prepare them for the future.”

Distributed by African Media Agency on behalf of Un News. 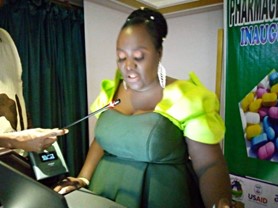 FOR THE SUPPLY AND DELIVERY OF BIOMETRIC EQUIPMENT, SOFTWARE & MATERIALS
https://thenewdawnliberia.com
,