It is less than 72 hours since I did a critique regarding Chairman Alex Cummings’ appearance on the 50-50 Talk Show. I concluded that the health of our national politics was deplorable and lamented the chronic weakness of those playing active leadership roles in the opposition community as well as the government.

As if things are not bad enough, the public is being drawn to the disturbing and shaming development at the Senate. Senate Pro Tempore, Albert Chie, a CDCian and leader of the ruling establishment, which the opposition should be trying to change, is accusing Senator Dillon, the CPP Senator, of being a two-faced hypocrite. Dillon who was uncharacteristically silent, is being accused in front of colleagues in the Senate Chambers of collecting money from Chie under the cover of darkness, and pretending to be a fighter for the masses in the day.

Since Pro Temp Chie made those grave allegations against Dillon, declaring further that Dillon is corrupt and informs him “behind closed doors”, we have not gotten any forceful denial from Dillon. A few die-hard supporters have unfortunately turned themselves into a spin machine, flipping this serious character scandal by accusing Chie of being disloyal to CDC and President Weah for doling out money to Dillon.

What we are witnessing here bears resemblance to a guy who publicly denounces homosexuality but is caught red-handed sleeping with a young boy. If this is not hypocrisy, then I don’t know what it is. By the way, does anybody remember what led to Jimmy Swaggart stepping down from the pulpit?

You see, these attempts at making Dillon look inculpable cannot withstand the light of scrutiny. Because, only a politically groomed cult member will not see the blatant hypocrisy and moral bankruptcy associated with the so-called Light begging for money from the ‘darkness’. Imagine, Dillon, the host senator collecting and trading information for money to the ruling party through Chie! This news is seriously troubling for any political movement.

It is needless to remind us that we have been through too much as Liberians and as such, we can no longer afford to have empty glory-chasing opportunists pretending to love the masses while they make business with the ruling party government under the cover of darkness. Maddeningly, we saw this before; when in 2003, the Consolidated Registered Political Parties (CRPP) under the leadership of David Kortie and Cllr. Rudolph Sherman clandestinely operated with former President Taylor by mortgaging the interest of the masses. And so, our campaign against a weak and wobbling opposition has got absolutely nothing to do with a like or dislike of Dillon, or even the CPP but comes from the well documented history of what can happen when the opposition is weak, hypocritical, lacks character and deceptively cuts shady deals with the ruling establishment. It is also a known historical fact that Cletus Wotorson exploited the weakness in the opposition community when he was selected overnight as the Coalition’s Standard Bearer in 1997.

In our struggle for a better Liberia, we need to spurn the temptation of getting immerse into political footballification, and search for real credible and reliable individuals, not conmen who will betray the interest of the masses at the drop of a hat. I think these pretences at speaking for the Liberian people while pushing one’s selfish agenda has not helped Liberia, and must be condemned at all times no matter who does it.

The point is that had Chie not leaked Dillon’s regular secret meetings with him, none of us would have known that Dillon has been cozying up to Chie in the darkness for money. It looks like the leopard in Dillon is making no efforts to change its spots. Imagine, the controversy surrounding his high school paper; the issue with the car; and the noise with the US$6000; now we are dealing with the issue about the brother clandestinely taking money from element within the upper echelon of the CDC Government.

Besides Sen. Chie, who else in the ruling establishment is Sen. Dillion milking? Are there other elements in our opposition community that are also using the Dillon technique? I think the CPP needs to investigate the whole situation, or risks not being taken seriously. Also, this offers a chance to the CPP to showcase its stated commitment to higher standards.

We, as opposition figures cannot be vociferous in our condemnation of CDCians for being slavishly loyal to their Standard Bearer, and at the same time, being culpable of doing the same thing in the CPP. Hence, I think the CPP needs to take the moral high ground to either advise or investigate Dillon for the sake of the morale and reputation of the movement.

Some of us are passionate about the forward advance of our country. And so, we will not shy away from pointing out the pitfalls in the government and the opposition community for fear of being shouted down by internet car boys and the usual Facebook mob.

About the author: Atty. Isaac W. Jackson, Jr., is currently serving as Liberia’s Permanent Representative to IMO. Before his assignment, Jackson served with Liberia’s Ministry of Information, Culture and Tourism from 2008 as Assistant and later Deputy Minister for Press & Public Affairs. Jackson defends a political career which arises from his days as a student activist at the University of Liberia, where he received a Bachelor in Economics and Political Science. He later earned Bachelor of Laws from the Louis Arthur Grimes School of Law. Currently, he is a candidate for Master of Laws in International Economic Law, Justice and Development at Birkbeck, University of London. He can be reached at whiekonblo@yahoo.com 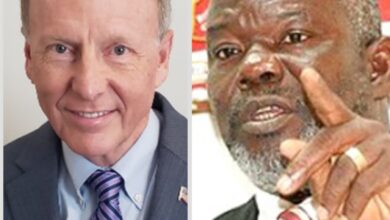