Golden Veroleum Liberia has partnered with two key media training organizations to build the capacity of local radio stations in Sinoe and Grand Kru Counties, with a communications train-the-trainer program in Monrovia, 16-19 July.

According to a press release issued by GVL in Monrovia, participating media outlets include Voice of Sinoe, Voice of Grand Kru and Voice of Pleebo community radio stations. Additionally, select staff members of Farbric FM, based in Monrovia were invited.

“Media is very valuable in Liberia and we consider a structured approach to helping build capacity from within,” said Virgil Magee, GVL Head of Corporate Communications. “The workshop seeks to strengthen the unique identity of community radio stations as platforms for providing facts to the population, while building broadcast cohesion between media outlets.”

According to Magee, the workshop will also offer an opportunity to share experiences and identify best practices in programming and how they can be enhanced. As part of the company’s Corporate Social Responsibility efforts, it is focusing on outlets located primarily in its area of operations in Sinoe and Grand Kru.

Other CSR efforts have included the implementation of GVL Scholarship Fund, of which approximately 1,500 awards have been made to date; additionally the company has built its first elementary school in Butaw District in Sinoe, which recently conducted its first graduation ceremony.

“I think this is a really good start for the program and shows that GVL is serious about its interaction with media in our country and serious about making partnerships,” said Max Klah, station manager for Voice of Sinoe radio.“We want this to continue since it will certainly help our progress and bring together some journalists, who may have never interacted with each other.”

The Liberian Film Institute, founded by Devine Anderson, traditionally teaches its students how to use various hardware and open-end software to make movies. “We are engaged in bottom top down approach to transformation in our African society, using film as a tool to enlighten people at all levels of understanding,” said Anderson. “Such an approach reveals how our day-to-day activities affect others in our immediate environment and society as a whole. It’s good that GVL decided to sponsor such a program.”

During the program, instructors from all three institutions gave various blocks of instruction, including video, writing, journalistic editing, ethics and audio editing and equipment care and maintenance.

“The reason we decided to structure the program in this we was to show that even for radio, there are journalistic similarities across platforms which can be applied to all electronic-based media including television, radio, print and the Internet,” said Magee.

“Of course, we want to build capacity for agricultural and county reporting and this in just one step. We will be doing similar programs in the future on additional journalistic subjects and hope to expand the program to include more outlets, more journalist and more locations.”

No Intention to Contest 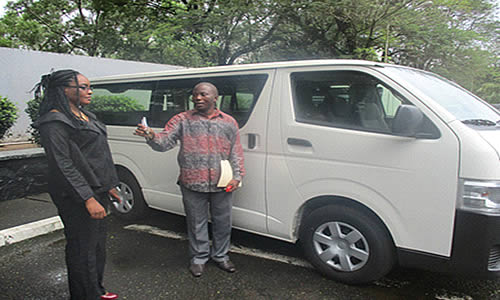 No Intention to Contest

The Waste of War