Members of the House of Representatives have overwhelmingly voted for the ratification of the US$1.6 billion palm production agreement between the Liberian government and the Golden Veroleum Company.

The lawmakers reached the ratification decision following a joint committees’ that thoroughly perused the agreement by committee members of the both chambers.

The deal if finally sign by President Ellen Johnson Sirleaf into law and subsequently printed into hand book, according to Lofa County Representative Moses Kollie, will create 35, 000 jobs for the people of the Southern Region.

The US$1.6 Billion deal will be operative in Sinoe, River-Gee, Rivercess and Grand Kru Counties is expected to last for 25 years. Following the endorsement exercise House Speaker Alex Tyler immediately forwarded the document to the Liberian Senate for concurrence, the Liberian Senate without delay adhered to the process the same day.

At the same time, there have been joint hearings on the oil deal between the Liberian Government and the North American Company Chevron Corporation.

Speaking during the Wednesday, September 01, 2010, hearings, the president of the National Oil Company of Liberia Dr. Folay Kromah said that the country is nearing the process of exploration of natural oil.

According to him, the Liberian Government will generate high revenue in the tone of US$100 million during the period of exploration, about US$150,000 are allotted for social development contract for counties that they (Chevron) will be operating from, counties that have been highlighted for the operation includes; Grand Cape Mount, Grand Bassa, Bomi, Rivercess and Montserrado Counties.

He also named US$75,000 as package for the University of Liberia per year, contribution of the company toward educational sector of the country. He noted that the company has already provided US$500,000 to Rivercess and US$300,000 to the Grand Cape Mount Counties.

Chevron is an American multinational energy corporation with Headquarters in San Ramon, California, and active in more than 180 countries, it is engaged in every aspect of the oil, gas, and geothermal energy industries, including exploration and production; refining, marketing and transport; chemicals manufacturing and sales; and power generation. Chevron is one of the world’s six “super major” oil companies. 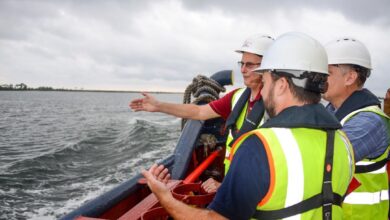 US Ambassador gets acquainted at APM Terminals Liberia