PORTSMOUTH, United Kingdom, 1st March 2022,-/African Media Agency (AMA)/- The President of Malawi, Lazarus Chakwera, alongside other political, business and diplomatic leaders, have restated their commitment to quality and purposeful leadership in Africa. President Chakwera, who committed while receiving the African Leadership Person of the Year Award, called on other leaders across the continent to join hands towards building a prosperous Africa. The event with the theme: PHILANTHROPY, IMPACT INVESTING, AND SUSTAINABILITY IN AFRICA, held at the iconic Dorchester Hotel, London, with virtual participation from other distinguished Africans who were unable to attend physically.

The President, in his speech, stated, “I am excited to be named the African of the Year.” Continuing, he averred that, “with this accolade, I am even more determined to press on with my push for greater sovereignty for our country and Africa at large.”

President Chawkera, while speaking on the global interconnectedness and the need to unite against the prevailing ills of poverty and climate change, maintained, “If one nation pollutes its air in the west, as has seen to centuries, it affects the weather patterns in Malawi.”He also commended African Leadership Magazine for making the persons of the awards a vote-based honour, primarily determined by the votes of Africans from around the world.The event also had the business, political and diplomatic leaders in attendance, including Baroness Sandip Verma, Member, House of Lords, United Kingdom; the Ambassadors of Kenya, Ivory Coast, & Botswana to the U.K.Earlier, the World Health Organization Director-General, Dr Tedros Ghebreyesus, congratulated President Chakwera and all other winners for emerging winners in the 10th Edition of the awards. Dr Ghebreyesus, the 9th African Leadership Person of the Year, stated that he was happy handing over to the new African Leadership Person of the Year due to his record of impeccable leadership in Malawi.
Also presented with awards in different categories includes Kwanele Ngwemya, Chief Executive Officer, NBS Bank, Malawi, Mactar SY Founder/CEO, SYLAM Technologies Group SAS, Senegal, Rt. Reverend Patricia Sappor, President, Chartered Institute of Bankers, Ghana; Capt. Musa Nuhu,Director-General, Nigeria Civil Aviation Authority, Nigeria, Polaris Bank Limited; Mukwandi Chibesakunda, Chief Executive Officer, Zambia Commercial Bank (ZANACO) Plc; Abdulmajid Nsekela, Managing Director, CRBD Bank, Tanzania Dr Helen Oritsejafor, Founder, A Hand to the Needy Foundation, Nigeria.

The African Leadership Magazine Persons of the Year Awards, the leading vote-based third-party endorsement in the continent, has continued to attract interest from Africans within and in the Diaspora.

The African Leadership Magazine Persons of the Year, which is in its 10th year, is an annual award reserved for distinguished Africans who have blazed the trail in the year under review. A shortlist of nominees are selected from results gathered via a Call for the nomination – traditionally promoted via paid online and offline campaigns across the continent, Europe, and the Americas. The call for nomination is the first step in a multi-phased process.

The African Leadership magazine is published by African Leadership (U.K.) Limited, a company registered in the United Kingdom. The magazine focuses on bringing Africa’s best to a global audience, telling the African story from an African perspective; while evolving solutions to peculiar challenges the continent faces today.Since its maiden edition, African Leadership Magazine has become a leading pan-African flagship leadership-focused publication read by over 1 200 000 targeted international investors, business executives, government policymakers, and multilateral agencies Africa, the Middle East and Asia, Europe, and the U.S. It is distributed at major international and African Leadership events around the world. The magazine has over 1 000,000 subscribers/Followers on Facebook and a virile readership on other social media platforms. It is a niche and unbiased African voice born out of a desire to tell the African story from an African perspective by focusing on individuals and corporates known for their legacy-based approach to leadership.

The post Malawi President, Lazarus Chakwera, others restate commitment to quality leadership at the 10TH ALM Persons of the Year  appeared first on African Media Agency.

Tia goes back to the beginning of her journey, was it just a dream? 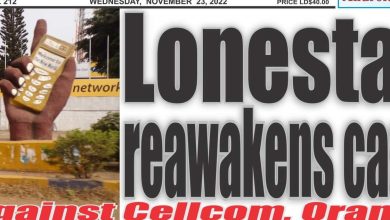