In February this 2022, a big announcement came from the Capitol Building. Liberia’s House of Representatives finally passed amendments to existing elections law – to allow firm commitment from political parties and the National Elections Commission to improve the number of women in elections. The news was too good to be true – but it was true. The House did pass the amendment, and sent it to the Liberian Senate for concurrence, where it still is waiting action.

Two things would happen if the Senate concurs on section 4.5 of the proposed bill: political parties must have at least 30% of either gender on the candidate listing or risk not participating in an election; and NEC would now have legal authority to reject any candidate listing that does not meet the 30% threshold.

Since 2005, there have been several unsuccessful attempts at affirmative action for women in politics – including gender quotas and reserved seats. The 2014 New Elections Law amendments basically included a voluntary party quota. The goal in subsequent years was to amend the election law to include strong language that legally obligates political parties to comply with the 30% gender quota and an accountability mechanism that provides sufficient legal authority to NEC to reject candidates listing that fell short of the threshold.

Before the amendment, Section 4.5 (1) (c) of the New Elections law says “a list of candidates submitted to the commission for an election should endeavor to have no less than 30% of the candidates on the list from each gender.

It’s the word ‘endeavor’ that is problematic; and this needed to be changed first before any meaningful change would occur in increasing women political participation.

And this is where UN Women, with funding from the Government of Canada, stepped in with different supports to relevant institutions.

The WPEL Project ran for four years from 2017 to 2022 with the goal of increasing the number of women in politics and decision making.

With UN Women support, the language in the law has improved. Now, it says “a list of candidates submitted to the Commission for an election shall have no less than 30% of the candidates from each gender.”

Campaigners say the word ‘shall’ has better legal implications to obligate parties to comply.

Lisa Kindervater-Sieh is senior expert for women political participation at UN Women in Liberia. For her, getting the language right is the most important aspect of making the amendment impactful.

“The language says a political party shall endeavor to ensure no less than 30% of either gender on the listing. The phrase ‘endeavor to ensure’ is pretty ambiguous. So, the question over the last few years has been what it means that a party has endeavored; by what benchmark can NEC determine a political party has indeed endeavored to put women on their listing.  And there’s no mechanism in the existing law that says NEC should reject party listing if they don’t meet that threshold. Without that strong language and without the accountability mechanisms, very few parties have met that threshold?”

“The WPEL project’s objective of increasing women in politics comes from the prognosis that women in Liberia, when it comes to decision making, are few. It’s that persistent underrepresentation of women in decision making. Currently, Liberia has only 11% of lawmakers that are women. In 2005, we had about 14%. Are we regression in terms of women’s leadership? To get this right, we need to begin to reform existing laws, and that comes with strengthening the language in those laws.”

Both Lisa and Nyasha argue that women political participation is probably the area where the least progress has been made because it requires changing power structures; and of course, people who are in power don’t want to share power.

“This is an issue that has been at the forefront of the Liberian women’s movement for decades. It’s a very difficult process to convince men that they don’t have to lose for women to gain; that when more women are represented, that it will also benefit the men and it will benefit communities and nations,” Lisa notes.

Lots of efforts went into the 2022 milestone achievement towards increasing women political participation and leadership. Unlike 2010, the 2020 amendment was submitted by NEC after series of coordination and engagements with partners.

NEC Commissioner with oversight responsibility on Gender, Joseph Kou Gaye, says the amendment on Section 4.5 of the new election law was a result of support from UN Women.

The project worked with NEC’s gender section to develop working guidelines and policies, including the Codes of Conduct for Political Parties and the Inter-Party Consultative Committee. This is in addition to support for the development of the Protocol on Violence Against women in election and Politics (VAWiE/P).

Commissioner Gaye also has oversight on Civic and Voters’ Education at NEC.

NEC Senior Gender Officer, Manakabay K. Donzo agrees that rolling out gender activities at NEC would have been difficult if not for UN Women intervention. “UN Women has actually been our backbone. Many times, we don’t have money in the budget internally for the gender section. UN Women has always been there to support us. During the COVID-19, there was no funding for the gender section in the budget, but UN Women was with us all the time.”

Members of the Women Legislative Caucus say they are now better positioned to work with their male counterparts in the Legislature because of training and support from UN Women.

“UN Women has been doing well whenever there is a training. They taught us many things that have given us the needed exposure. From them, we learned how to engage crowd. From their training, we built our confidence in politics. Politics, it is about talking and talking logic and talking with sense; and doing what you talk about. So, they have been very supportive to the Women Legislative Caucus. But we still anticipate more because you know we are going to a crucial election in 2023,” says Moima. 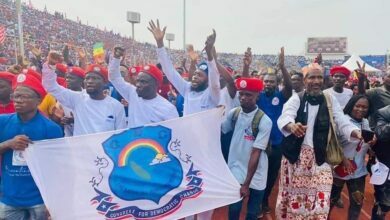