US Secretary of State, Anthony J. Blinken says the United States firmly believes that it’s time to stop treating Africa as a subject of geopolitics and start treating it as the major geopolitical player it has become.

During his two-day working visit to Nigeria as he continued his tour of Africa which began in Kenya and is expected to conclude in Senegal, Mr. Blinken praised institutions like the African Union, ECOWAS, SADC, IGAD for the larger roles they play in global issues and asked that they be given greater voices in global debates.

“The US knows that, on most of the urgent challenges and opportunities we face, Africa will make the difference,” Mr. Blinken said on 19 November 2021 at the Main Hall of the ECOWAS Commission as part of the series of engagements.
“We can’t achieve our goals around the world – whether that’s ending the COVID-19 pandemic, building a strong and inclusive global economy, combating the climate crisis, or revitalizing democracy and defending human rights – without the leadership of African governments, institutions, and citizens,” he added.

During his visit to Nigeria, Mr. Blinken had an engagement with the Nigerian youths, young entrepreneurs, and the media on the strategy of the US-Africa policy.

He called for more platforms to be created for the continent’s young people who are energized, innovative, hungry for jobs and opportunities.

It has been predicted that by 2025, more than half the population of Africa will be under age 25 and by the year 2050, one in four people on Earth will be African and Nigeria will surpass the United States as the third most populous country in the world.

“I believe that Africa will shape the future, not just the future of the African people but of the world,” said Mr. Blinken.
In terms of combating the Covid-19 pandemic, the US will work with African Countries to strengthen global health security, establish more laboratories, and the National Center for Disease Control to help prevent, detect, and respond to future emergencies and manufacturing of Vaccines in South Africa and Senegal, to begin with.

Mr. Blinken revealed that the US has delivered 250 million doses worldwide with 50 million going to 43 African Countries and by next spring, that number will be well over 1 billion donated doses which will significantly ramp up the vaccine manufacturing capacity, to meet the global needs with no strings attached.

In addressing the global climate crisis, Secretary Blinken emphasized the need to work together to reduce emissions and production of clean and efficient energy which will be resistant to climate change. He called for more efforts to be made in the expansion of access to clean, efficient, and renewable energies which will reduce emissions and create opportunities for good-paying jobs.

He spoke about working with Nigeria to address security challenges, including those posed by Boko Haram, ISIS West Africa, and other terrorist and extremist groups.

He continued that the United States is committed to helping Nigeria do that by continuing to invest in its security partnership and the institutions that strengthen the rule of law and that hold accountable those who commit human rights abuses, corruption, and other acts that harm the Nigerian people.

He advocated for the use of new technologies to ensure democracies are strengthened and not undermined.
To resolve conflicts, Secretary of State Blinken said the United States stands ready to support swift and sustained diplomacy with national leaders, regional organizations, international allies and partners, citizens – including women, who must always be at the table when peace is being negotiated and also with international institutions, including the United Nations.

As a show of the US commitment to Africa, Nigeria signed a $2.1 billion development assistance agreement with the US that supports collaboration in the fundamentals: health, education, agriculture, good governance.

Later, the Secretary was scheduled to visit the “Innov8” start-up hub, to meet some of the inventors and founders who embody Nigeria’s entrepreneurial drive.

Mr. Blinken said the United States wants to strengthen its partnerships across Africa in ways that serve Africa’s and the US’ interests, and the interests of people worldwide whose lives and futures depend in part on what can be achieved together.

“And as a sign of our commitment to our partnerships across the continent, President Biden intends to host the U.S.-Africa Leaders Summit to drive the kind of high-level diplomacy and engagement that can transform relationships and make effective cooperation possible,” he noted.

“I know there’s a fierce rivalry among West African countries about who makes the best Jollof – well, I’m a diplomat, so I’m going to steer very clear of that one,” he joked.

The “Giant of Africa” is an apt nickname for Nigeria, because this country looms large.  Your strengths are undeniable – a dynamic democracy, a robust economy, and a very powerful civil society,” said M. Blinken.

“The challenges you face are undeniable as well – including the disruption and insecurity caused by terrorism and armed groups he said while calling for greater partnership.” 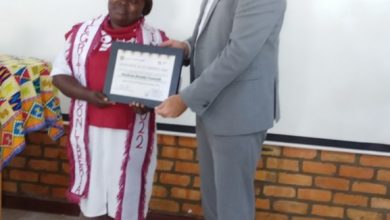 An Open Letter From U.S. Ambassador to Liberia Michael A. McCarthy

New Eco-brigades challenged to give Buchanan and Greenville cities facelift

Gongloe to protest on December 14

Fidelity Healthcare suffers over US$ 33,000 lawsuit