The former executive director of the National Investment Commission (NIC) George Wisner says failure of the Weah administration to address the ongoing rice crisis in the country has turned the Liberian government into a complete laughingstock.

“When President Weah came, he trashed the shortage of rice as news in the streets; the Commerce Minister says sufficient rice is in country, now NPA through its Communication Director gave fake news about 34,000 metric tons that landed yesterday. All these things turn this government into laughingstock”, Mr. Wisner notes, while commenting on prevailing situation in Liberia characterized by scarcity of rice, country’s staple.

He made the observation on Wednesday, October 5, 2022, while speaking with OK FM via mobile phone in Monrovia.

He attributes government’s failure to find lasting solution to the rice crisis to gross incompetence, noting that it was unfair for government to make mockery of the very people, who stood in long queues to give them the power that they currently enjoy.

Yesterday, the communication director at the National Port Authority, Malcolm Scott, claimed a vessel containing about 34,000 metric tons of rice had ducked at the Freeport of Monrovia to help address the current scarcity, and that said consignment could last up to January 2023, while awaiting another vessel.

“So, the information that we have is that a rice vessel with 34,000 metric tons is currently at birth here at the port and as we speak, this vessel is being offloaded”, Scott said.

He added, “When you do the calculation of the 34,000 metric tons in terms of bags, is around one million, three hundred sixty thousand, and we believe this quantity can last up to January before the next vessel arrives.”

But following the pronouncement, several media houses confirmed touring the port facility and coming across a vessel which they say had berthed for over 40 days, and that there was no fresh quantity of supply as claimed by the NPA thru spokesperson Scott.

The New Dawn reporter, who also went at the port to verify the information, was denied entry by security officers, on grounds that there were lots of journalists already inside the premises.

But reacting to what has now become fake news, Mr. Wisner said it was saddening that people working in government will make mockery of the public they serve especially, at the time when the country is in crisis. Editing by Jonathan Browne 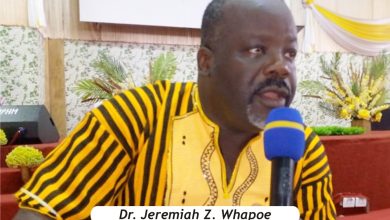