TORONTO – A few years ago, during a conversation with young people from some of Senegal’s poorest communities, a pair of social entrepreneurs told me about projects they were working on to help their peers succeed. One young man said he planned to put more computers into primary schools; another had set up a network to connect rural job seekers in the urban tumult of Dakar, Senegal’s capital.

After they finished sharing their plans, I congratulated them, and said that their parents must be very proud. But instead of accepting the compliment, they demurred. “My parents are against what I’m doing,” they said, almost in unison, before explaining that young people face family pressure to get a government job or use their English skills to work as a tour guide – not to become a risk-taking entrepreneur.

For ambitious young Africans, there are many obstacles to success. The journey to a job – whether formal or informal, entrepreneurial or traditional – is often a solitary one. Many young people lack access to skills training or even a favorable social environment to try something new. As I was reminded that day in Senegal, helping young people find gainful employment is the most important thing that the international community can do to help Africa develop.

Africa is home to the world’s largest population of young people. In about 25 years, those young people will be part of the biggest workforce in the world, with more than 1.1 billion people of working age. By some forecasts, 11 million people will enter Africa’s labor market each year for the next decade, most of whom will be first-time job seekers.

If African countries boost job growth and equip young people with employable skills, this youth bulge can deliver rapid, inclusive, and sustainable economic growth to the continent. In turn, millions would have the opportunity to lift themselves out of poverty.

But Africa cannot achieve this future alone. At the Mastercard Foundation, we believe that, if Africa is to reach its potential, gaps in two keys areas must be closed.

The first area is access to financial products and services. According to the World Bank, some two billion people around the world currently lack such access. In Sub-Saharan Africa, just 34% of adults have a bank account, making it difficult for people to put money aside for unplanned events, like a bad harvest, or to save for school. This must change, with Africans gaining not only better access to banking systems, but also improved financial literacy.

The second key challenge that must be addressed is exclusion from secondary and higher education. While progress has been made in some regions, only about one-third of Africa’s young people graduate from high school. Girls are particularly disadvantaged; according to UNESCO, in Sub-Saharan Africa, an estimated nine million girls under the age of 11 have never been to school, compared to six million boys.

To address these issues, the Mastercard Foundation has established partnerships with local organizations to design education and financial-literacy programs aimed at helping young people find and keep jobs. By building a better-trained workforce, the Foundation’s programs are helping to empower the next generation of Africa’s community members and leaders, so that they can help their families, communities, and countries achieve a brighter and more prosperous future.

Already, a new generation of educated and ethical entrepreneurs, like those I met in Senegal, is emerging across Africa, demonstrating a profound commitment to building a stronger Africa. For example, when I ask young people participating in our Scholars Program what they plan to do with their new skills, they almost always reply that after getting a job, they plan to help somebody else, by returning to their secondary schools to serve as mentors to younger students.

Some of our program’s graduates have even established community projects in their villages to address HIV/AIDS or to build shelters for orphans and young children. Every one of these bright young Africans – examples of what the Mastercard Foundation calls “transformative leadership” in action – has the potential to drive change in their own countries and communities.

Those of us working in the field of international development can help level the playing field even more, by giving young Africans from all backgrounds an opportunity to lead in transformative ways. If we succeed, Africa’s dreamers of today will be the catalysts of positive change tomorrow.

Reeta Roy is President and CEO of the Mastercard Foundation. 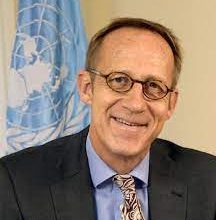