Tell me something my son, they say wetin happening there?

Aah, dis one too big for my mouth oo. They say da na small flogging, they flogging my Old Man son in Rofa oo.

But I hear they say da na small noise they making there too oo. They say they will na sit down there for the people to cheat them.

You mean the Old Man from the handshake?

But wait oo, my son, what the Old Man people making all the noise for? Whereplay they were er when the children from the Country Giant camp were visiting Rofa eversince?

Ehn they were running from one court room to the other one; the same people were cheering them to be wasting their time in court. Wetin they think the people were doing it for?

You mind them, Father; instead of them preparing, they were wasting their own time here, running around. Ehn they say they know book, the children da na know book jab them and put their hay together, while they were campaigning bad way in Rofa. This one if da na lesson for them na, then me  I na know when they will learn na oo hmmmm.

No, my son, when they come back, they mon say the people cheat them; so they can be running from place to place again until the big one in 2023 come catch up with them.

I wonder they think the children will be waiting for them sef to fini with their cheating palaver before they all start campaigning together, hayaka.

Wait let them just be there. They mon na learn. Let them go sit down again as soon as they say voting time reaching then they want start making noise.

But you will tell me my son.

Um, you mind them. They will waste all their time going to court. Today they will call for the commissioner’s hay. The next day they want the commissioner noise and the following day the hands. All that thing they are doing their friend them going from one town and village to another campaigning oo.

Let them be there Rofa da lesson number one.

Anyway, what kinda joke that Uncle Sam man was giving yesterday so?

What do you mean?

Oh Father, you didn’t hear? The man was telling us how Adam, I na know their second or third President lose to Jefferson after only one term.

But da na the one that catch my heart oo. He say Adam not just lose oh, but he lose to Jefferson who was his bitter enemy. And when the man was talking the thing our Prezo was just sitting down right behind him giving him eye linking.

No wonder our Prezo na talk plenty sef when he came up because da kinda joke, me myself will not accept it sef.

I going to do voting then you telling me story about somebody who went there and only stay one time and lose to his bitter enemy-puah. Da one da na joke oo. 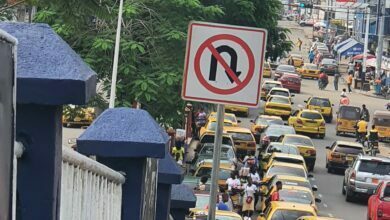